Venice LNG Open Season 2021 procedure opens on 26/10/2021. Interested operators will be able to submit the Expression of Interest until 26 November 2021 by accessing the reserved area of this website.
To obtain credentials or for any other information, please write to: openseason@venicelng.it

15/01/21 - VENICE LNG HAS BEEN AWARDED THE AUTHORIZATION FOR THE CONSTRUCTION AND OPERATION OF THE LNG STORAGE FACILITY IN PORTO MARGHERA.

Venice LNG has been awarded the authorization for the construction and operation of the project through the Authorization Decree issued at the end of December 2020 by the Ministry of Economic Development, in coordination with the Ministry of Infrastructure and Transport and with the approval of the Veneto Region. The Decree relies on all the opinions issued by the relevant stakeholders involved in the authorization process, including: the Technical Commission for verifying the environmental impact VIA and VAS, the Venice Safeguard Commission, the Ministry of Cultural Heritage and Activities, the Veneto Region, the CTR Veneto, the Venice Port Authority, the Veneto Interregional Superintendency for Public Works, the Trentino Alto Adige region, the Friuli Venezia Giulia region and the Municipality of Venice. The project is promoted and supported by the Port System Authority of the Northern Adriatic Sea and is co-financed by the European Commission as part of the CEF (Connecting Europe Facility) programming through the actions called Gainn4SEA and Venice LNG Facility for a total of 18,5 million euros.

The Future of Porto Marghera: A Sustainable Industry

Porto Marghera celebrated its centenary in 2017: an extraordinary history, made possible by large industries and visionary entrepreneurs, who have been able to transform this remote corner of the lagoon into one of the most active industrial hubs in Europe.

Energy logistics is one of the historical sectors of the industrial area in Marghera, having contributed to the development and economic growth of Northern Italy and the whole country since the post-war years.

Decal Spa, Venice LNG’s sole shareholder, has since then been a key player in this process with the storage of petroleum, chemical and petrochemical products, biofuels and vegetable oils.

The International Strategy for Reducing Pollution

The goal of Venice LNG’s project in Marghera is to contribute to the development and consolidation of liquefied natural gas (LNG) as the fuel of choice in supporting the energy transition. LNG has actually the lowest environmental impact currently available on the market.

LNG is spreading around the world as a fuel for trucks, ships, factories, municipal distribution networks remote from pipelines, long-haul buses and trains.

Securing a rational and economic distribution of energy products, both traditional and innovative, requires coastal storage facilities to allow importing products by sea and distributing them to customers in the areas of greatest demand.

Our code of ethics

A SUSTAINABLE AND SAFE PROJECT

Once fully operational, with a capacity of 32,000 cubic meters, the Venice LNG storage facility will be able to feed trucks and ships handling approximately 900,000 cubic meters of LNG per year.

Construction will take about two and a half years, employing over 100 operators, including engineers and highly skilled workers. The project’s key characteristic is that it is "storage as a service", meaning Venice LNG will be providing storage for third parties and it will not own the LNG stored.

Venice LNG obtained the authorization for construction and operation through the Authorization Decree, issued at the end of December 2020 by the Ministry of Economic Development in agreement with the Ministry of Infrastructure and Transport, in agreement with the Veneto Region. The Decree adopts all the opinions expressed by the bodies involved in the authorization process, Venice LNG has been analyzed, approved and funded by the European Union and is supported by the Port System Authority of the Northern Adriatic Sea.

total investment for the project

overall storage capacity of the facility

manpower employed for the construction of the facility

duration of the construction phase

Today LNG as a fuel can be primarily sourced from 35 plants in Europe, two of which have recently commenced activities in Italy. There are further facilities in the planning stage or under construction. Some of them are part of large re-gasifiers, which feed the natural gas distribution network.

Other plants, such as Venice LNG’s, are smaller in size and are dedicated solely to supplying the local LNG transport and consumption market.

The distribution of LNG to service stations and to other users takes place by tanker trucks; moreover, LNG is re-loaded on small tankers (“bunker vessels”) which supply passenger and cargo ships, in line with today’s standard practice for traditional fuels.

The environmental qualities of LNG

Natural gas, in gaseous or liquid form, emerged in the second half of the last century to replace coal and petroleum derivatives due to better environmental qualities and energy yield.

Distributed through large gas pipelines and city networks, natural gas is used for space heating and to power industries. Since the beginning of 2000 it is also used to generate electricity.

Compared to petroleum derivatives, the combustion of natural gas reduces nitrogen emissions by 80%, it does not generate carcinogenic fine dust or sulphur compounds and it reduces climate-changing CO2 emissions by 20-30%. In addition to exhaust emissions, vibrations and noise emissions are also lower.

About ten years ago, transport companies and shipowners began using LNG as a fuel for trucks and ships, starting a new and ever-expanding industry.

Use of Liquid Methane and BioGNL

The presence of Venice LNG will incentivize the use of liquid methane in the area of Marghera, Mestre, Venice and the Lagoon, reducing the risk of soil and water contamination and improving air quality.

The ambitious national and international decarbonisation targets propelled the scientific and technological research process, pointing to the complete removal of any residual environmental and climate impact of the LNG consumption.

BioGNL has a neutral climate impact. Mixing it with fossil fuels in ever increasing percentages complies with the most stringent current and future emission thresholds, without the need to further replace engines and infrastructures.

Looking Into the Future

Venice LNG will be able to store and handle both LNG and bioLNG, since their chemical composition is identical.

Moreover, emission credits are now available in various countries. They can be purchased to offset the emissions of large LNG carriers, which could gain a "carbon free" qualification consequently.

There is currently a strong commitment by national and international institutions, as well as private companies, to reduce the risks of permitted or accidental emissions of methane, the main component of natural gas, which has a high global warming potential.

Other new alternatives to oil-based fuels are being studied, such as "green" hydrogen and “green” ammonia, and synthetic LNG (S-LNG, made from "green" hydrogen), produced from renewable energy. The Venice LNG site is also suitable to store bioGNL and synthetic LNG and, depending on the technological evolution, it may be further developed to handle other innovative products. 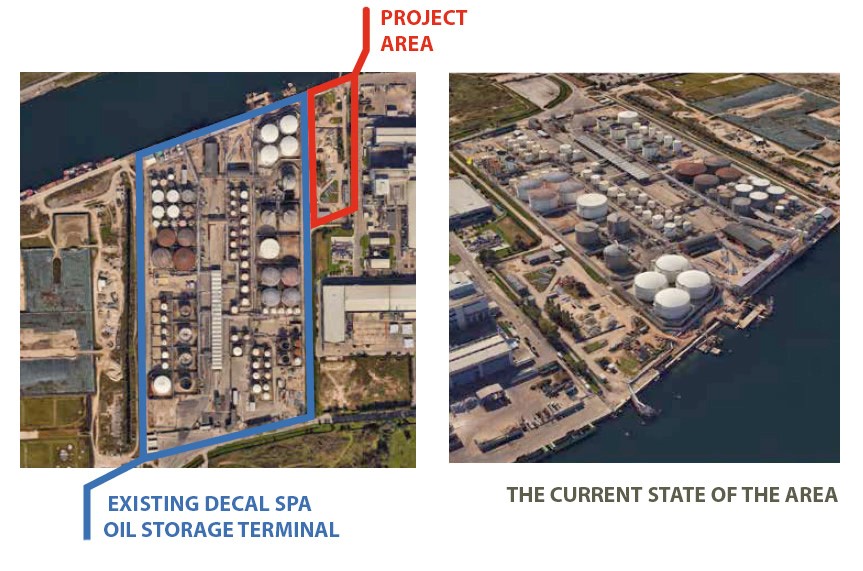 The use of LNG in heavy land transport began in Italy in 2014 with the first service station in Piacenza, a hub for major long-distance transport companies, while dozens of refueling points already existed in the rest of Europe at the time. Italy caught up and in 2019 became the leader in Europe in terms of the number of service stations and trucks on the road.

The LNG refuelling service stations are equipped with a cryogenic tank for storing liquid natural gas which is delivered directly to trucks and in the form of compressed gas to cars.

New LNG heavy vehicles have the same performance as vehicles powered by traditional fuels: LNG trucks can travel up to 1,600 kilometres on a single tank.

This result has been achieved despite the lack of coastal LNG storage facilities in Italy until a few weeks ago: operators had to refuel in France, Spain, or Northern Europe, with a material increase in costs.

The higher procurement spending determines a strong imbalance between the North, which is home to 64% of LNG distributors, the Centre, with 25%, and the South, with 11%. Rebalancing this scenario will only be possible with new storage facilities, such as Venice LNG.

PERSPECTIVES FOR THE FUTURE

By the time Venice LNG will be operational, in 2025, approximately 250 service stations and 8,500 trucks are expected to circulate in Italy, for a consumption of approximately 700,000 cubic meters.

By the same year, there will be about 1,000 service stations and about 35,000 trucks in Europe, for a consumption of about 3 million cubic meters. This market is expected to grow strongly in Central-Eastern Europe, an area of extreme interest for Venice LNG.

The first LNG vessel, excluding large LNG carriers, entered service in the Baltic Sea in 2013. Since then, orders have grown steadily with a strong acceleration since 2019.

LNG seafaring is today the most modern and the least impacting on the environment. Cruise ships, container ships, oil tankers, merchant ships and ferries are powered by LNG, supplied directly by small tankers or by tanker trucks from port docks.

The coastal LNG storage in Porto Marghera is co-financed by the European Union's Connecting Europe Facility The sole responsibility of this publication lies with the author. The European Union is not responsible for any use that may be made of the information contained therein